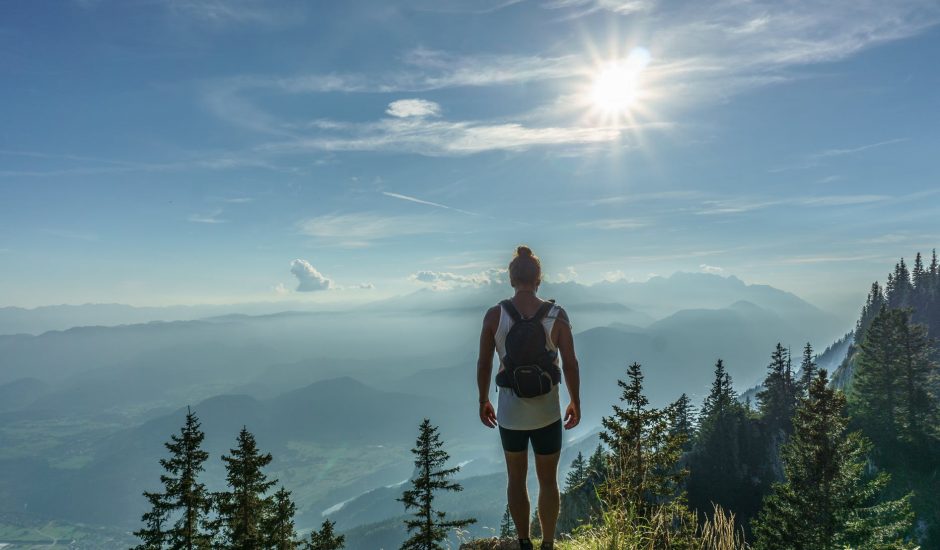 A trip around Slovenia’s most famous landmarks

Every summer, my boyfriend and I choose a different destination for our one week summer holidays. We like to explore the nature and are fascinated by the many cultures of different countries. Last year we travelled to Indonesia, where we really enjoyed the beautiful beaches and were amazed by local cultures. This year we agreed that we didn’t want to spend all of our holidays only by the sea, but wanted to go hiking as well. Our first decision was to book plane tickets to two different locations in Europe, until we stumbled upon a hidden gem, which offers both hiking adventures and lying by the sea or lake and relaxing. And since we wanted to explore a country that is not so well-known among foreigners and therefore crowded with tourists, it was a perfect place for the two of us.

I am writing about Slovenia, a tiny country in Central/Eastern Europe. It used to be a part of Yugoslavia, and it gained its independence in 1991. Its neighboring countries are Austria, Italy, Croatia and Hungary. Now it is a member of the European Union and is one of the greenest countries in the world. It is also a winner of the 2017 National Geographic World Legacy Awards for sustainable tourism. The country is covered in lush forests and offers many natural landmarks. The architecture varies between regions and is mostly traditional.

Ljubljana was the first stop in our one week trip around Slovenia. It is the capital city, however the population is only around 300,000. Our trip took place in July, during the summer holidays. It is the most “touristy” part of the year, no matter where you are traveling. Slovenia however, despite being one of the smallest countries in Europe, was still very peaceful. The main streets of the capital city, Ljubljana, were packed with tourists, as we expected of course. But once we followed some of the less known streets of the city, it was really peaceful. There is no traffic in the old part of town, so it is a paradise for pedestrians and cyclists.

The Old Town is wonderful. The architecture is amazing and there are many cute shops and bars near the river. We walked around for a while and found a culinary event near the main square. It is called Open kitchen (Odprta kuhna in Slovene) and local restaurants bring their specialties and prepare them on an open square, where the market is during the week. It is a fantastic place to have lunch as one gets to choose from a variety of local and foreign cuisine. We tasted the ribs with bbq sauce and a special local burger. The place offered many craft beers and wine to go with the food. It was a great experience, and apparently we went there quite early, as there were not many people. The place was packed later, as locals came to the center for a quick bite to eat.

In the evening, after checking out the views from the castle on the hill, we sat down in a bar by the river and enjoyed looking at the people passing by, with a pint of local craft beer in our hands. It was a lovely evening and walking back to our hotel was particularly enjoyable, as we got to enjoy the streets that were not completely crowded with tourists. Main points you should absolutely check out include: Preseren Square, Congress Square, the castle, the market with the Open kitchen (takes place in the market every Friday in the summer, except for when there is bad weather), the Three Bridges and the streets by the river. If you have time, you can check out the many escape rooms in the city, since they are well known in Ljubljana.

Overall, we enjoyed our short stay in Ljubljana very much, it is an adorable city with tiny streets, shops and great views. Despite being crowded with tourists during the day, at night the restaurants and bars by the river are lively and the streets outside the centre get really quiet.

On Saturday we went to Bled, a town in Northern part of Slovenia, in the Upper Carniola. The town’s main landmark is a lake with an island in the middle. On the island there is a church and the legend says if you ring a bell in the church, it brings you good luck and happiness. 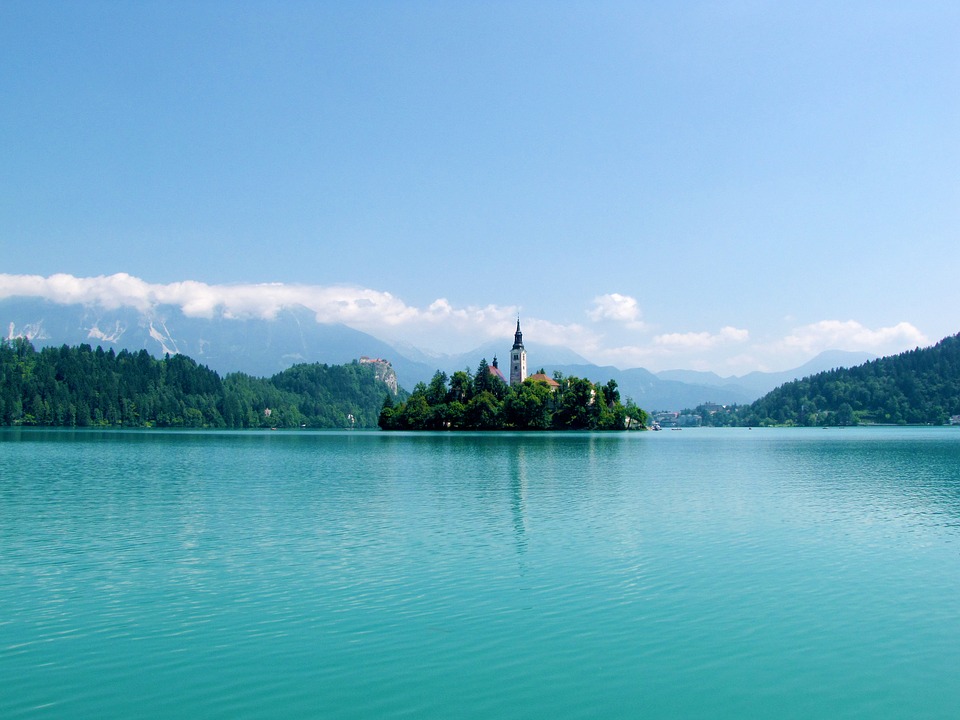 We took a bus to Bled, since the connections from the Ljubljana main stations are quite good. The trip took about an hour and a half, mostly because of the traffic jams just outside of Bled. The main station in Bled is near the lake, so we would be able to start exploring right away, but first we dropped off our backpacks at the hostel a bit further away from the lake. We heard about a hill near the path around the lake, that offers a great view of the lake, island and the castle above the lake. It is called Ojstrica and the path up there takes only about 20 minutes, so we decided to check it out. We decided to complete a lap around the lake on foot and enjoy some swimming and a hike up Ojstrica Hill along the way.

We first looked to hike up the Ojstrica Hill and later jump into the fresh lake. The starting point for the ascend was clear and we were able to hike up there in just 20 minutes. We met quite many tourists and locals along the way, as it is a popular hiking spot in Bled. We continued our trip around the lake at the rowing centre, where we went for a swim. There were many people swimming, sitting in the shade and kids playing near the lake.

Adventures on Soca River in Bovec

Our next destination was Bovec, in the middle of the Alps and near the emerald river called Soca. We changed our plans for a day when we heard about the fantastic activities on Soca river from a couple we met at the hostel in Bled. We were able to book a rafting trip just a day before, and the customer service was great. 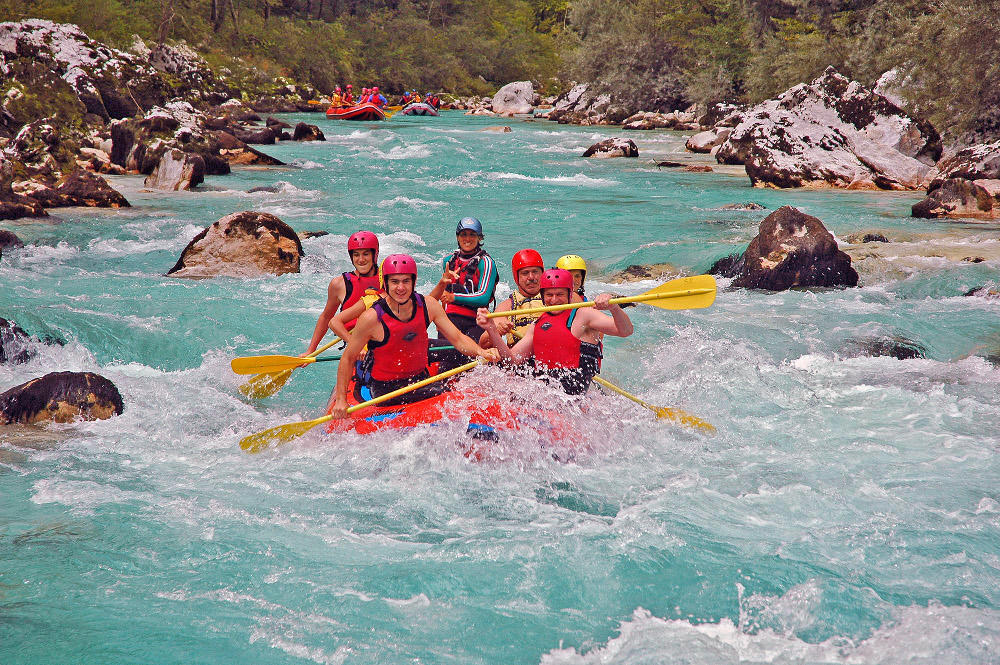 We chose the activity because we like adrenaline, but not extreme sports like canyoning – Bovec also offers possibilities to go canyoning, but it is more physically demanding. The crew was very nice and funny, so even the more nervous among us were able to relax. However, the most important aspect of the trip is of course safety, so they taught us a few things we had to know before the trip and they took care of the suitable equipment. They did not rush us so we were able to enjoy the trip down the river. The whole trip took about three hours, and we enjoyed every second of is one of the cleanest rivers in Europe and is nicknamed “the Emerald River” by the locals, and the views from the river are spectacular. There are just enough rough parts of the river so crossing them fills you with adrenaline, otherwise the trip is pleasant and calm. We were glad that our main activity was rafting, Soca proved to be the perfect place for that activity.

Other, more or less adrenaline-filled activities are possible on the Soca River. Kayaking stands in the middle, as you are alone and have to navigate past difficult parts in a small kayak, but the river is mostly calm and so the trip is part scenic part active. In all of the activities the guests are accompanied by experienced guides, who know the river very well.

Our path lead us to the Southern part of Slovenia in the next days, where we decided to see one of the most beautiful karst caves in the world. One of Slovenia’s main tourist attractions is Postojna Cave. The train takes visitors into the cave and they get to walk around for a while in the centre of the cave. However we decided to see the Skocjan Caves instead, since we heard that they are a bit less crowded. The Skocjan Caves are a part of UNESCO world heritage. The trip around the caves takes a few hours, and we enjoyed it very much.

Relaxing by the coast

After our trip to the caves we went straight to the seaside. The Slovenian coastline is quite short, but beautiful. We decided to visit a town of Piran for a day and enjoy the streets, have some ice cream and finish the day by relaxing on the beach. The town was lovely, the architecture was completely different from the other towns in Slovenia that we visited previously. We had lunch in a nice trattoria. Being a coastal city, Piran is known for seafood and mediterranean cuisine. A glass of the local white wine suited the fish and seafood dishes that we ordered. 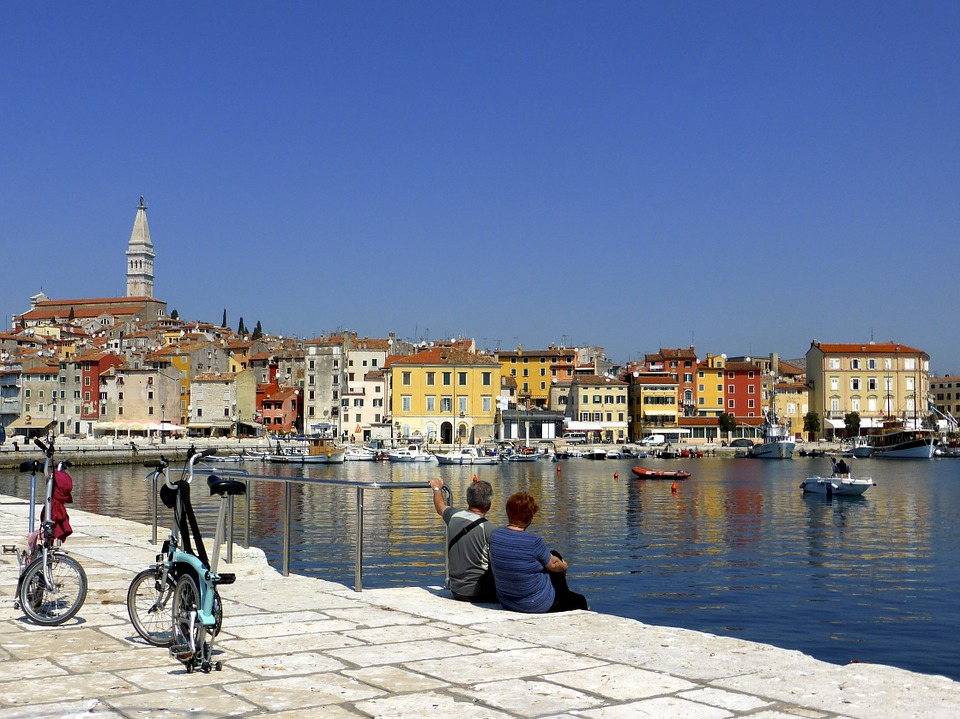 Tartini Square is the main area for cultural events in the city, and there was a stage set up when we visited. After lunch, we sat down in a cafe on the square and treated ourselves with some coffee and delicious ice cream. The swimming spots were not so nice, so we decided to explore the coast a bit further and we ended up in Portoroz (went there with a bus), where the beaches are more friendly.